I’ve written about mind-controlling parasites and I’ve also written about ants a couple of times, but for some reason I still haven’t written about the famous “zombie ants“. These fascinating, macabre little wonders are ants that have been infected by a fungus (Ophiocordyceps unilateralis) which manipulates their behaviour. The fungus makes the ant climb up at plant stalk and bite into the underside of a leaf, clinging to it in a death grip. The fungus then kills the ant, consuming its innards before sending a reproductive stalk out through the corpse’s head.

I recently found out about an exciting research project looking into how the fungus manages its manipulation of the ant. Charissa de Bekker, a post-doc at Penn State University, is using Microryza to crowdfund her project, which will investigate what genes are active in the fungus’ manipulation of the ant. Since I think it’s an awesome project, I invited her to answer a few questions about herself and her work. Read on to find out what she has to say, and if you think the project sounds interesting or useful, consider backing it on Microryza — she’s got 11 days left to reach her goal! END_OF_DOCUMENT_TOKEN_TO_BE_REPLACED

The skin is one of our body’s first lines of defense, but it’s also home to a rich community of microbes — the skin microbiome.  These bacteria are important in protecting us from pathogens; changes in the skin microbiome are linked with conditions ranging from dermatitis to psoriasis.  In a paper published this month in the journal PNAS, a team of scientists from the University of Pennsylvania showed that these bacteria don’t just live on our skin, but also play a role in regulating our immune response. END_OF_DOCUMENT_TOKEN_TO_BE_REPLACED

The microbiome — the kilogram of microbes that each of us carries around — has been shown to be involved in everything from obesity and type 2 diabetes to behaviour and sexual preferences.  The composition and effects of the microbiome are very active areas of research, producing results which have challenged the way we think about the evolution and interactions of organisms, including ourselves.  In a paper recently published in the journal Science, researchers showed for the first time that the make up of the microbiome differs between the sexes, linking these differences to changes in hormone levels and disease resistance.
END_OF_DOCUMENT_TOKEN_TO_BE_REPLACED

I’ve already written several times about the bacteria in the clouds and what they do up there; now, a new study from the Georgia Institue of Technology in Atlanta has described the communities formed by the bugs in the sky.  In a paper published in the journal PNAS, the researchers detailed the communities of skybugs and how their composition is affected by storms, giving us a better understanding of life in the sky. Not only might this help us better understand atmospheric chemistry, but it may also shed further light on how microbes spread, which could impact the dynamics of everything from ecosystems to diseases.
END_OF_DOCUMENT_TOKEN_TO_BE_REPLACED

A while ago I wrote about how bacteria make their way into clouds, where they act as seeds around which raindrops condense. Now, a team of scientists in France has shown that the microbes floating around in the clouds do more than just make it rain to bring them back down to the surface; they also carry out chemistry while they’re up there.
END_OF_DOCUMENT_TOKEN_TO_BE_REPLACED 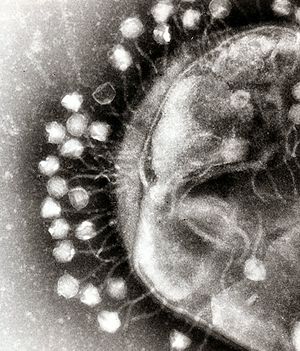 Your body has ten times more bacterial cells than human cells containing 150 times as much genetic material.  I’ve written several posts about how our gut bacteria, the microbiome, can influence the development of allergies, obesity and type-2 diabetes.  We’ve only recently started studying the microbiome and there’s still a lot to learn; it’s quite an active area of research.  For example, just last year scientists discovered that individuals could be divided into three groups based on the composition of their microbiome, but new research has cast doubt on that idea.  And yet, like a matryoshka doll, our biology has still another surprise in store for us: wherever bacteria are found, there are viruses which infect them.  As we learn more about the microbiome and its implications, some scientists have turned their attention to the the viral microbiome, the viruses that prey on our gut bacteria and shape their community. END_OF_DOCUMENT_TOKEN_TO_BE_REPLACED