Ants have been farming for far longer than humans have existed. They discovered fungus farming around fifty or sixty million years ago in the wet rainforests of South America, and have continued tending their underground fungus gardens through countless years as the planet changed and changed, and changed again. Much more recently — just a few years ago — I wrote about the fungus-farming ants (called “attine ants”), trying to imagine how they might view human agriculture. Our imaginary attine author closed with the hope that studying humans might help the attines understand their own history, “such as how the transition from primitive to advanced agriculture occured in our own ancestors”, and now a study by a group of humans has shed light on that very question. END_OF_DOCUMENT_TOKEN_TO_BE_REPLACED

The newly discovered Bone-house wasp, Deuteragenia ossarium, builds a unique nest for its young. Unlike species which excavate their own nests, D. ossarium belongs to a group of nest-building wasps which use existing cavities, such as abandoned galleries of wood-boring beetles, as nest sites. Female wasps abandon their nests after sealing their brood within; they don’t care for their young or offer any protection beyond what the nest provides. The nest consists of a few brood-containing cells and an outer ‘vestibular’ cell — an entryway — which probably serves as a defensive barrier. The vestibule is usually empty, but researchers surveying nests in southeast China found a surprise in some of the entry halls — they were full of ant corpses. The team reared the brood from the nests and discovered a new wasp species, which they named after the striking ossuaries found in some parts of the world.
END_OF_DOCUMENT_TOKEN_TO_BE_REPLACED 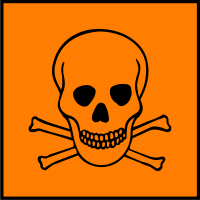 Since plants generally can’t move around, they have to rely on other strategies to cope with animals eager to turn them into a meal. Chemical weapons are a significant part of plants’ defensive arsenal. For example, thousands of plant species produce precursors of the deadly poison hydrogen cyanide; when an animal eats the plant, the precursors get converted into cyanide, which kills the offending animal. END_OF_DOCUMENT_TOKEN_TO_BE_REPLACED

I would normally save this striking video for a Found While Foraging, but since it’s time-sensitive I decided to share it immediately:

Dean Rider, an assistant professor at Wright State University, got in touch with me about his crowd-funding project to sequence the blue beetle genome. I’ve never heard of the blue beetle, but it sounds like a fantastic little critter and I’m generally fond of crowd-funding (as has certainly become clear by now), so have a look at the project and consider spreading the word, even if you can’t back it yourself.

Flies are incredibly agile on the wing, pulling off twists and turns that outstrip anything we’ve accomplished. Their flight is powered by two pairs of large muscles in their thorax which contract rhythmically to make their wings beat anywhere between 100 and 1000 times per second. Power is transferfed from these muscles to the wings by a hinge made of an intricate collection of steering muscles. Although the steering muscles make up less than 3% of the flight muscle mass, they very effectively direct the force produced by the larger muscles, thus guiding the fly’s aerial acrobatics. In a paper appearing in PLoS Biology, a team of scientists from the UK and Switzerland used a particle accelerator to record high-speed X-ray images of blowflies (Calliphora vicina) in flight, producing a 3-D video of the inside of the fly showing the muscles moving as it manuevered. END_OF_DOCUMENT_TOKEN_TO_BE_REPLACED