This is a story about a gene which makes nursing mice produce more nutritious milk while also making their offspring less demanding. The gene serves to balance nutrient supply and demand between the mother and pup. If the gene is knocked out, the mother’s milk is less rich, but the pups are more demanding, evening out the impact. Things only go wrong when there’s a mismatch. If pups with a defective copy of the gene feed from a normal mother, their increased demand makes them grow larger than normal. Conversely, pups with a good copy end up smaller if they feed from a mother lacking a working copy, since her milk is less nutritious.

So far we’ve talked about mothers and pups, but there’s a third player in this dance: the pup’s father. We inherit two copies of every gene, one from each of our parents, so the father has a say in which version of the gene the pup gets. For a gene like this, it’s in the father’s best interest to pass on a defective copy in an effort to knock out the gene in their offspring. Without a working copy, the pups will either be normal sized (if the mother also has a defective copy) or oversized (if she doesn’t) — either way, they end up better off than any siblings with a working copy. It seems like a win-win situation for the fathers; of course, things aren’t actually that easy.

The father’s winning scenarios come at the expense of the mother and her other pups, and she’s at the focus of this particular evolutionary conflict. She’s the one that has to provide nutrients, and she wants to make sure that all her pups do well — not just the demanding pups with (genetically) manipulative fathers. The mother has a lot more at stake, so her priorities have shaped the evolution of this gene and its role in development. Both copies (maternal and paternal) of most of our genes are usually expressed, but this gene is one of the exceptions. In a process called ‘imprinting’, only one of the copies is active; the other copy gets switched off. The father’s version is active in the brain and spinal cord, but the mother’s version calls the shots everywhere else. This means that the same version of the gene — the mother’s copy — is controlling both the pup’s nutrient demand and the mother’s mammary glands, coordinating the interaction to ensure a comfortable balance. The father doesn’t get a chance to shift things his way, since his version of the gene simply isn’t in play.

The story doesn’t end there, though. The gene doesn’t just control the balance of supply and demand between the mother and pup; it also controls the amount of lean tissue and fat in the pup. Pups with defective versions grow into adults with more lean mass and less fat. By fostering pups with a defective copy with mothers with a normal copy (and vice versa), researchers made a startling discovery. The lean/fat ratio in the pups doesn’t depend solely on what version of the gene the pup has, but also on the copy in the nursing mother. The pup’s copy of the gene determines how much lean tissue it has; knocking out the gene leads to more lean mass. The amount of fatty tissue, on the other hand, is decided by which version the pup’s nurse has. Pups nursed by mothers with a defective copy have less fatty tissue but the same amount of lean tissue.

So it turns out this gene is crucial to the pups’ development in two different ways. The versions in the mother and pup cooperate to coordinate the pups size; as long as the two are the same, everything is fine, but a mismatch leads to trouble. The mother’s copy of the gene is active in the pup in most of the pup — the father’s copy gets switched off — so there usually isn’t a mismatch (unless nosy researchers start swapping pups around in fostering experiments). At the same time, the gene in the mother is controlling the amount of fatty tissue in her pup, while the pup’s copy controls its lean mass. If the mother and pup both have defective copies, the pup will be normal sized but end up with more fat and less lean tissue. For those of you who are more visual, here’s a wonderful summary picture from the research paper: 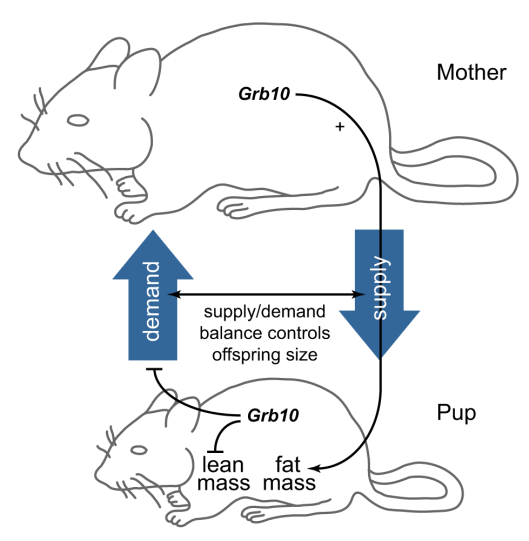 The gene (Grb10) has controls supply & demand in the mother & pup, as well as the lean/fat ratio in the pup. (Image credit: Figure 5 from the paper)

Of course, this research was all conducted in mice, and it’s not clear how well the results will apply to humans, since we have a pretty strange offspring-mother relationship where the fetus voraciously tries to dominate the mother’s tissues and hijack control of its nutrient supply. Nevertheless, it’s a pretty amazing system, the result of an interplay between the conflicting interests of several actors and the evolutionary and developmental forces that have reconciled them.