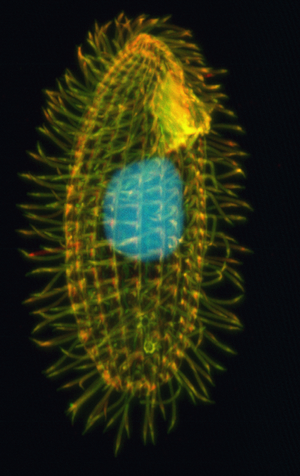 Tetrahymena thermophila is a ciliate, a unicellular creature covered with short, hair-like cilia.  Although ciliates are single-celled, they’re more closely related to us than to bacteria.  Unlike bacteria, ciliates (and other single-celled eukaryotes) house their DNA in a nucleus the same way that plants, animals, and fungi do.  In fact, ciliates are remarkable for having two nuclei, a larger one and a smaller one.  While multicellular animals have special cells (sperm and eggs) for reproduction, ciliates, being unicellular, settled for having multiple nuclei instead.  The larger nucleus (macronucleus) is used for the day-to-day running of the cell, while the smaller micronucleus is only used for sexual reproduction.  When two ciliates reproduce, the macronucleus disappears from both partners, while the micronuclei undergo meiosis and then come together to form a new macronucleus.  It’s during this process that the sex of the new T. thermophila gets determined.

The team identified a pair of genes, dubbed MTA and MTB, that are responsible for the sex of T. thermophila.  The proteins made by these genes are probably expressed on the surface of the cell, where they can interact with the MTA and MTB proteins of other T. thermophila cells to find out if they’re different.  By studying the macronucleus and micronucleus, the researchers discovered that MTA and MTB, which are always located side-by-side, come in different versions corresponding to the different sexes.  While the macronucleus only has one copy of MTA and MTB, corresponding to the sex of the cell, the micronucleus has copies of all the different versions.  These different versions are incomplete, lacking a fragment of the two genes which is common to all the sexes.  They’re strung together in a row which is flanked on either end by the remaining fragment.  When two micronuclei come together during mating, all but one of the copies of MTA and MTB are cut out and discarded; the remaining pair are stitched together with the flanking fragments to form complete copies of MTA and MTB in the new macronucleus.  The sex of the new T. thermophila cell depends on which copy of MTA and MTB it gets, which seems to be randomly decided.

Each coloured block represents an MTA/MTB pair of a specific type (II, V, VI, etc). The germline micronucleus at the top contains all the different versions. During formation of the macronucleus, all but one pair are cut out; the remaining MTA/MTB pair determine the sex (in this case, VI). The grey coloured regions are common to all the sexes, but the only complete copies are the larger versions (at the extreme left and right of the row in the germline nucleus); these are stitched to MTA/MTB during sex determination. (Reproduced from the article in PLoS Biology)

This is an amazing and intricate way to pick a sex!  It’s much more similar to aspects of our immune system than to our relatively simple XY sex-determination system.  That’s not entirely surprising, though — matching between mating types is more like self/non-self recognition than what we think of as sex.  Nevertheless, it’s a stunning piece of molecular biology.  The DNA rearrangements and editing involved are extremely precise, and we don’t understand how they’re carried out.  Fortunately, T. thermophila is commonly used in experimental biology; since it’s so easy to work with in the lab, this is a great opportunity for scientists to learn more about DNA editing and repair processes.  I have to admit, though, that the real reason I decided to write about these critters is just how amazingly strange the story is: two nuclei, seven sexes, and a weird, complicated, beautiful way of managing it all!

8 thoughts on “An amazing critter with seven sexes!”