This morning, the European Space Agency (ESA) released the results from the Planck mission, a satellite designed to peer back at the earliest fraction of a second of the universe. It’s not our first glimpse of those early moments, but it’s the best look we’ve had to date. While the data from the Planck mission doesn’t overturn our understanding of the universe, it’s a treasure trove for theoretical physicists and brings some exciting questions to the fore.

Away from the orange glare of our cities, the night sky is a breath-taking sight, a velvet curtain richly adorned with countless specks of glimmering light and the great, starry dynamo of the Milky Way. A sensitive enough telescope would fill that blackness with countless stars and galaxies invisible to us, a night sky dense with celestial wonders. An even more sensitive telescope could probe the void between those stars and galaxies and find a faint background glow coming from every direction. This glow is the cosmic microwave background radiation, the oldest light in the universe.

The early universe was hot. It was so hot that even atoms couldn’t form and matter existed only as plasma, a soup of protons and electrons. Although plasma might sound exotic, it’s actually quite common. Lightning is made of plasma, and you can also find it inside fluorescent bulbs and plasma globes. Because the early universe was a hot, dense plasma, light couldn’t travel very far through it; the whole universe was effectively opaque. Light goes through things that are transparent (like glass or air), but the charged particles in a plasma scatter light so effectively that it doesn’t get very far. Only after other types of matter had formed could light travel through the universe. Around 380,000 years after the Big Bang, the universe had cooled enough for the protons and electrons in the plasma to come together and make hydrogen. Shortly afterwards, light could finally travel freely; that light is what we see as the cosmic microwave background radiation.

During the billions of years that it traveled towards us, the light cooled due to the expansion of the universe. From an initial temperature of around 3000K, it cooled over a thousand-fold to become the 2.73K (-270°C) glow we now detect. The cosmic microwave background (CMB) was first detected by Arno Penzias and Robert Wilson in 1964, a feat which earned them a Nobel prize in 1978. That wasn’t the last Nobel to come out of CMB research, though. In 1989, NASA launched the COBE satellite to investigate the early universe by measuring the CMB. COBE detected differences in the temperature of the CMB throughout the sky. Although the microwave background comes from every direction, the temperature of the radiation differs by fractions of a degree throughout the sky. These differences are because of quantum fluctuations in the earliest structure of in the universe, when it was expanding faster than light during the first fraction of a second of existence. These fluctuations are recorded by the last scattering of the light that makes up the CMB. The tiny variations in the temperature of the CMB enable scientists to peer back at the structure of the early universe — the seeds from which everything else came. This discovery earned a Nobel prize for lead investigators George Smoot and John Mather in 2006.

The famous map of the CMB variations from data produced by the COBE spacecraft. (Photo credit: Wikipedia)

COBE was followed by another satellite, WMAP, which launched in 2001 and measured the variation in the CMB even more precisely. The data from WMAP fit the Standard Model of cosmology quite well; based on these data, scientists calculated the age of the universe (13.772 billion years) and its composition: 4.5% ordinary matter, 22.7% dark matter (which doesn’t interact with light) and 72.3% dark energy (the mysterious explanation of the fact that the expansion of the universe is accelerating). The high-resolution data set also included a few surprising anomalies, such as an unusually cold spot in the CMB, unexpected correlations in the large-scale structure of the universe and the ISW mystery, an unexpected strong distortions of the CMB by matter in the late universe. 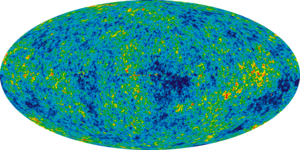 The Planck satellite was launched by the ESA in 2009 to measure the CMB at an even higher resolution and with more precision. The detectors on Planck are cooled to an incredible 0.1K, making it sensitive to variations as small as a millionth of a degree. This morning, the Planck team released their first set of results about the CMB, including a 50 million pixel map of the temperature variations.

Image of the variations in the CMB detected by Planck (Photo credit: ESA)

Comparison of the variations detected by Planck and WMAP (Photo credit: ESA)

Planck confirmed the findings of WMAP, though some of the figures have changed. The age of the universe is now thought to be 13.81 billion years, so everyone is tens of millions of years older. There’s also more ordinary matter (4.8%) and dark matter (26.8%), meaning there’s less of the stuff we really don’t understand — dark energy (68.3%)! There’s also no evidence that any of a variety of extensions to the Standard Model — from new families of neutrinos to cosmic strings — is needed. Overall, the data from the Planck mission matches the predictions of the Standard Model of cosmology remarkably well, affirming our understanding of the cosmos — which is really amazing!

The Planck mission also confirmed the anomalies in the WMAP data. The researchers at the press conference highlighted the large-scale correlations in particular. Cosmologists can use the Standard Model to predict how similar the temperature of the CMB will be at two points based on the angle between them in the sky. Their predictions match the Planck data amazingly well, but only for small angles. For points farther apart in the sky (ie, separated by more than about 6°), the temperature of the CMB seems to be more similar than theory would predict. The same anomaly had been found by WMAP, but it might have been an artefact of the instruments or the analysis. The fact that Planck also found it makes it more likely that this is a real feature of the CMB.

Correlations of the temperature variation of the CMB at different distances in the sky. The predictions (green line) match the observations (red dots) extremely well for small angles, but not as well for large ones. (Photo credit: ESA)

Planck also confirmed other anomalies, such as the cold spot and the ISW mystery, and produced enough data to keep cosmologists and astronomers busy for years to come. These unexplained phenomena are a tantalizing reminder of how much we still don’t understand, despite the incredible accomplishments of cosmologists so far. “The universe is not really so simple,” said Paolo Natoli, one of the lead scientists of the Planck team. “Theories need to be improved.”