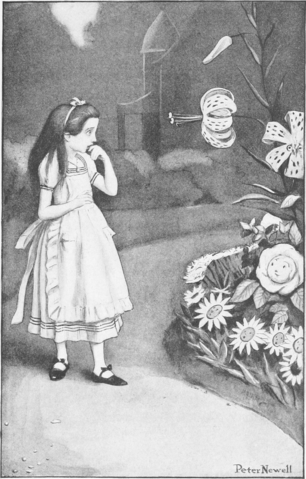 In Lewis Caroll’s Through the Looking Glass, Alice wanders into a garden with flowers that can talk — the “garden of Live Flowers”.  Of course, all plants are alive, but here the flowers are called “live” because they can talk.  One of the greatest examples of human arrogance might be our attitude towards plants.  We treat plants as objects, as part of the background, as mere things without any agency.  We tend to forget that they’re dynamic, complex living creatures that react and respond to their environment — just in unfamiliar ways and on a different timescale.

When plants are attacked by herbivores, they release airborne chemicals which inform other plants — even plants of a different species — about the attack, enabling them to prepare themselves for the inevitable onslaught.  Plants might respond by pre-emptively activating their defenses or simply by priming them for a quicker response once they are attacked.  The plants receiving the warning might even produce other chemicals that attract predators of the herbivore — a sort of call for help.

Plants only emit these chemicals for a period of a few days after they’re attacked, but the receiving plants have no way of knowing how quickly the herbivore will reach them.  How long should they keep their defenses primed for?  After all, keeping the defenses primed takes energy away from other processes.  How do plants balance this cost against the benefit of a more active defense system?  (How do they find the optimal time to remember the attack for?)

A team of scientists based in Egypt and Japan tried to answer these questions by comparing the defenses of two groups of maize plants; the first group was downwind of plants being attacked by armyworm larvae (Mythimna separata) but the second wasn’t.  To evaluate the strength of the receiver plants’ defenses, the researchers let larvae attack them at different times after they had been exposed to the warning chemicals: immediately after the attack or following 1, 5, or 10 days.  By measuring how much weight the larvae gained, they could get an idea of how well the plants were defending themselves.

Immediately after the attack, larvae gained less weight if they were on plants which had been warned rather than those that hadn’t, showing that the warned plants had a more active defense system.  The same was true after a day and after five days, but not after ten days.  By then, the effect had worn off and larvae did as well on both groups of plants.  The plants had raised their defenses for somewhere between five and ten days, then gone back to normal.

The team also tracked the activity of a gene involved in defense and found that it followed the same pattern.  Immediately after the attack, the gene was expressed three times more strongly in plants exposed to warning chemicals than in unexposed plants.  Plants attacked five days after receiving warning chemicals expressed the gene six times as strongly as unexposed plants, but after ten days the increased sensitivity disappeared — the response was only twice as strong.

How might the warning checmicals make activation of this gene more sensitive?  The researchers suspected this might be due to ‘epigenetic modifications’, where attachment of a molecule to parts of a gene’s DNA affects how it responds to different conditions without changing the DNA sequence itself.  They examined the DNA of the defense gene and found fewer of these modifications in plants which had been exposed to the warning chemicals.  In other words, part of the plant’s response to the chemicals was to remove the epigenetic modifications from this gene (and presumably others), making it more easily activated and thus priming their defense system.

So not only do plants warn each other about attacks by herbivores, they also use epigenetic changes to remember these warnings for several days after the attack.  They story doesn’t end there, though.  Plants perceive and respond to their environment in a variety of ways, adjusting their growth and beahviour based on what’s around them.  Below ground, roots grow less aggressively when they’re near relatives; on the surface, plants use the colour of light to gauge crowding and avoid shady conditions.  Plants sense everything from day length to the amount of nutrients and water in the soil, and integrate this wide range of information in their decisions about how to respond.  We do these fascinating creatures a great disservice by overlooking their vibrant and dynamic behaviour simply because we pass by too quickly to notice it.

13 thoughts on “The forgotten life of plants”

Leave a Reply to The Wisdom of Life Cancel reply