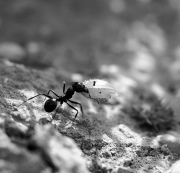 It’s time for another congeries of bits from around the web.  One of the links in this post (the bee videos) was sent in by a reader.  If you come across something that you think should be including in the next Foraging post, either leave a comment below or get in touch!