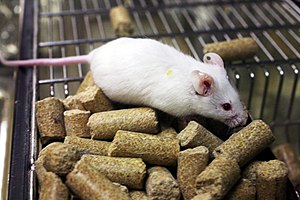 According to a recent study, your chances of developing adult onset diabetes may depend on what kind of bacteria are living in your gut.  It’s been known for some time that type 2 diabetes can be caused by a combination of genetic and lifestyle factors; over the past few years, it’s become clear that these factors somehow interact with the microbiome, but the nature of this interaction and the microbiome’s role in determining susceptibility to diabetes hasn’t been properly explored.  Last year a team of scientists from Brazil published results showing that changes in the community composition could completely reverse the effect of genetic factors.

The researchers studied mice with a defective copy of a gene called TLR2; these mice develop a range of diabetes-related symptoms, including obesity, glucose intolerance, insulin resistance and increased weight gain on a high-fat diet.  However, TLR2 isn’t a metabolic gene, but a gene which plays an important role in the immune system by recognizing Gram positive bacteria.  So why do mice lacking this gene develop diabetes, which is a metabolic condition?  It turns out that the absence of this gene leads to changes in the composition of their gut bacteria.  Their microbiome has a much higher proportion of a group of bacteria called Firmicutes and a reduction of another kind called Bifidobacterium, both of which are associated with diabetes-related symptoms.  Obese animals tend to have higher levels of Firmicutes; these bacteria help extract energy from food by producing enzymes which break down otherwise indigestible compounds.  Bifidobacterium are important in maintaining the gut barrier; lower levels of Bifidobacterium lead to an increase in gut permeability, which allows more of a molecule called LPS to get into the blood.  The immune system recognizes LPS as a toxin and responds, causing inflammation.  Both obesity and inflammation tend to cause diabetes, so the loss of TLR2 in these mice leads to changes in their gut bacteria which result in a higher risk of diabetes.

To confirm that the diabetes-related symptoms were a result of the changes in the microbial community, the researchers treated the TLR2 deficient mice with a cocktail of antibiotics. The antibiotic treatment killed off a lot of the Firmicutes and resulted in an improvement in insulin activity and glucose tolerance.  A converse experiment, transferring bacteria from the TLR2 deficient mice into healthy mice with a known microbiome, resulted in weight gain, glucose intolerance and insulin resistance.  The researchers therefore concluded that the role of TLR2 in the onset of diabetes is mediated by changes in the composition of the gut microbial community, specifically an increase in Firmicutes and a reduction in Bifidobacterium.

These results conflict with some previous studies which found that knocking out TLR2 had exactly the opposite effect — the mice had a lower body weight, were protected against insulin resistance and gained less weight on a high-fat diet. The researchers suggest that this may be due to differences in the gut microbiota resulting from the mice in the earlier studies being reared in different environments and eating food from different sources.  In fact, the TLR2 deficient mice in those study were found to have a lower proportion of Firmicutes in their gut, unlike the mice in this study.  It seems that the composition of our gut bacteria may be more important than a genetic predisposition in some cases, since the effect of some genetic factors is actually mediated by the microbiome.

I decided to write about this paper because it draws us into the question of what it means to talk about a “gene for” something. TLR2 is a gene which encodes a receptor involved in our immune response; in the strictest sense, this is what it is “for”. In a more conventional sense, many biologists would say that it’s a gene for recognizing certain types of pathogens, just as we commonly talk about a gene for cystic fibrosis or depression or left-handedness.  So should we call TLR2 a gene for diabetes?  While it clearly has a role on the onset of diabetes, its effect may be positive or negative depending on the bacteria to which an organism is exposed.  This is a case where our terminology fails to capture the biological complexity.  It’s essential to realize that genes don’t function in isolation or operate on a passive environment.  Instead, the path from a gene to a trait is full of a myriad of interconnected interactions, feedback loops and unexpected effects. This paper is an excellent example of how important it is to think of us not as individual organisms, but as ecosystems comprising a complex community full of mutual interactions and interdependencies.

(PLoS Biology is an open access journal, meaning the articles are available without a subscription.  I wish more scientific literature were publicly available.)

[I heard about this paper on episode #30 of the podcast This Week in Microbiology, which I fervently recommend for a weekly peek into the world of the very small.  This is the second time I’ve decided to write about a paper from TWiM; thanks for the great podcasts, TWiM-ites!]

16 thoughts on “Gut bacteria may cause diabetes”