The world of parasites is full of incredible tales of manipulation and mind-control as these creatures twist their hosts to their needs.  Ever since I first heard of parasitoid wasps, I’ve been drawn to them by a delicious mixture of schadenfreude and intellectual fascination.  (Technically, parasitoids are slightly different from parasites, but that’s not important right now.)  Some of the examples of manipulation by parasitoid wasps are just wonderfully, horribly macabre.  I briefly mentioned the emerald cockroach wasp in a previous post; this time I’ll give a few other examples and explain the emerald wasp more thoroughly.  Hopefully I’ll manage to share some of my excitement about these amazing creatures, which made Darwin once write: “I cannot persuade myself that a beneficent and omnipotent God would have designedly created the Ichneumonidae [a group of parasitoid wasps] with the express intention of their feeding within the living bodies of caterpillars, or the cat should play with mice.”

The wasp Hymenoepimecis argyraphaga parasitizes the spider Plesiometa argyra, somehow manipulating it into building a web for the wasp larva.  The female wasp lays her egg on a spider, where it hatches into a larva that sucks the spider’s hemolymph (the equivalent of blood in insects, spiders, and other arthropods).  Eventually, the larva makes the spider stop building its usual orb-shaped web and build a different shaped one instead, a remarkable feat of manipulation which we still don’t understand.  The larva then sucks the spider dry and builds a cocoon for itself, using the spider’s web to hang itself in the air where it’s protected it from predators on the ground. 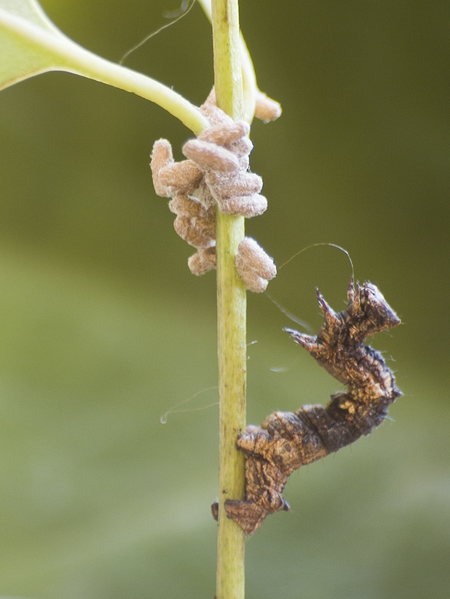 Glyptapanteles wasps lay their eggs inside caterpillars which serve as a food source for the larvae once they hatch.  After they’ve munched on the caterpillar’s insides, the larvae emerge and pupate; while the wasps are metamorphosing, the caterpillar defends the pupae against predators by swinging its head violently.  This behaviour isn’t seen in unparasitized caterpillars, but scientists don’t know for sure how the wasp manipulates the caterpillar. It’s thought that it involves modifying the central nervous system in some way that we still don’t understand.

The emerald cockroach wasp (Ampulex compresa) may be the best understood parasitoid wasp.  The adult female grabs its host (the cockroach Periplaneta americana) and stings it twice between the head and abdomen.  The first sting paralyzes the cockroach’s forelegs for a few minutes, giving the wasp time to place her second, more precisely targeted sting.  The wasp then goes off to find a burrow, leaving the cockroach unattended; the cockroach doesn’t take the opportunity to escape while the wasp is away, but instead stays put and grooms itself excessively.  When the wasp returns, she clips the cockroach’s antennae and gorges herself on the hemolymph oozing from the wounds.  She then grabs the stump of one antenna and leads the cockroach to the burrow she’s prepared.  The cockroach stays docile throughout the whole process, making no effort to resist or fight off its captor.  Once in the burrow, the wasp lays an egg and glues it to the leg of the immobile cockroach before entombing it alive.

(Even though someone repeatedly calls the wasp “he” in this video, it’s a female.)

By injecting wasps with radioactively labelled amino acids which would get incorporated into their venom, researchers were able to see to where the venom got delivered by the wasp’s sting.  They found that the stinger is able to penetrate the protection around the cockroach’s nervous system and deliver the venom to three specific bundles of nerves.  Some studies have even suggested that the stinger may be able to sense and recognize nervous tissue in the cockroach’s head, explaining how it can deliver the venom so precisely.  Venom is first delivered to a nerve bundle in the thorax, where it causes brief paralysis.  The following two injections, which reduce the cockroach’s motivation to walk away from threats, are directed to nerve bundles in its head.

By experimenting with stung cockroaches, scientists have learned that the venom affects the central nervous system by making it harder for the cockroach to respond to a stimulus.  For example, cockroaches normally walk away if they’re poked just once, but after being stung they need four consecutive pokes to start walking — and then they walk more slowly.  Researchers were also able to reproduce some of these effects by injecting one of the nerve bundles in the cockroach’s head with the drug procaine, confirming that it was responsible for the changes in the roach’s behaviour.  The effect of the wasp’s sting eventually wears off; the cockroach will recover in about five days if the wasp doesn’t lay an egg on it.  During that time, though, it remains still and doesn’t respond as well to stimuli.

Once the egg hatches, the larva cuts a hole into the roach’s leg and feeds on its hemolymph.  After around seven days of sucking the roach’s blood, the larva moves into it and feeds on its innards, slowly killing it.  The cockroach’s body isn’t just a resource for the wasp; it can also serve as a rich source of food for microorganisms.  The young wasp needs to protect itself from these competitors.  Recently, a team of scientists learned how they accomplish this. By watching through a hole in the roach (covered with a glass plate), they saw the larva secrete drops of clear liquid inside the body and spread them around (and made a video of it).  Chemical analysis showed that the liquid contained antimicrobial substances which stop a wide range of bacteria from growing.  Free from competition, the larva eats nearly everything inside the roach before building a cocoon for itself and metamorphosing into an adult.  Six weeks later, the fully grown adult bursts out of the cockroach’s body.

Parasitoid wasps excel at manipulating the neurochemistry of their hosts; studying their toxins can teach us a lot about the neuro-anatomy of their hosts and provide us with insights and drugs which can be useful for neuroscience.  As with everything else in biology, there’s still a great deal to learn.  We still don’t know what makes the cockroach groom itself after being stung by Ampulex, let alone how other wasps accomplish their amazing feats of manipulation.  Darwin may have taken parasitoid wasps as a mark against divine design, but to me they’re yet another fascinating example of the beauty of the natural world.  What about you?  Do you find the antics of parasitoid wasps fascinating or gross?  Are they beautiful or repulsive?

10 thoughts on “The wasp and the cockroach: a zombie story”