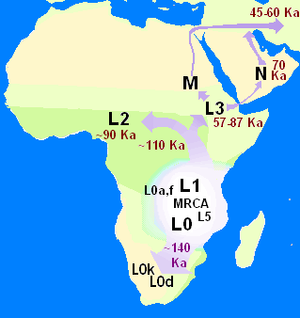 In a paper published in 1987 in the leading science journal Nature, researchers claimed to have identified a female from whom all humans alive today are descended, dubbed “mitochondrial Eve”; nearly ten years later, another group of scientists published findings identifying her male counterpart, “Y-chromosomal Adam”. The choice of names, though evocative, was unfortunate and uninformative, since the use of “Adam” and “Eve” has led to several major misunderstandings about these two ancient humans.  In this post, I’ll try to clear up some of these misunderstandings by explaining what these terms actually mean and how scientists have gone about trying to identify our most recent common male and female ancestors.