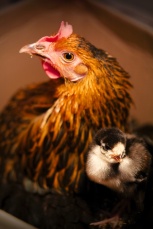 It’s probably not a surprise that humans aren’t the only animals with a sense of numbers. While they’re probably not actually counting, a variety of species seem to be able to tell the number of objects in a group; they can distinguish between groups with greater or fewer objects and react with surprise when the number changes unexpectedly. However, a recent study suggests that this numerical understanding may go deeper than we’ve previously thought.

If asked to arrange a set of numbers from smallest to largest, most of the people reading this would lay them out starting with the smallest on the left and growing towards the largest on the right. We’re equipped with a mental number line through which we map numbers onto space, linking left with ‘small/less’ and right with ‘big/more’. We’re quicker at numerical tasks (eg, picking which number is greater or telling odd from even) when larger numbers are shown on the right and smaller numbers on the left. This spatial map seems to be influenced by language. English speakers read from left to right, the same direction in which they orient their mental number line. In Palestinian Arabic, on the other hand, both the words and the numbers are written from right to left. Palestinian Arabic speakers are quicker at dealing with numbers when bigger values are on the left. Israelis straddle the two orientations, reading words from right to left and numbers from left to right, and their numerical performance isn’t left/right biased. To some extent, then, our mental number line is learned; research has also shown that its orientation is flexible, responding to environmental cues, and affects some unconscious behaviours when dealing with numbers.

So far, researchers have only seen evidence for a mental number line in humans, in keeping with the idea that it’s somehow influenced by our language. In January, Rosa Rugani and her colleagues offered compelling evidence for a deeper biological basis to the association between numbers and space. In a paper published in Science, they reported an elegant experiment showing that newborn chicks associate smaller numbers with the left space and larger numbers with the right.

The team first trained 3-day-old chicks to look for food behind a panel with five spots on it. Once the chicks had learned to do that, the researchers offered them a choice between two identical panels, one placed to their left and the other to their right. When the test panels had two spots on them (ie, fewer than the training panel), the chicks preferred to look for food behind the panel on the left; when there were eight spots (ie, more than the training panel), they went to look behind the panel on the right. 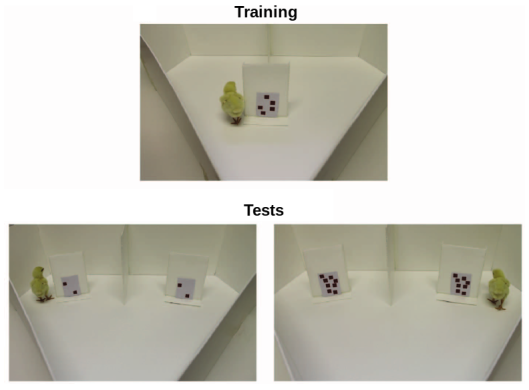 The chicks’ preference was due to the difference between the numbers, not their actual value. When trained to expect food behind a panel with five spots, chicks offered panels with eight spots preferred the panel to the right. If they were trained on panels with 20 spots, they preferred panels with eight spots when they were on the left. In other words, they expect the panel with eight spots to be on the right when they’re trained with a smaller number of spots, and on the left when trained with panels with more than eight spots. The researchers also varied the shape, size, and color of the spots, as well as the total area they enclosed, to make sure that the chicks weren’t using these cues instead of the number of spots.

So, does that mean that newborn chicks can count? Well, not really. (Sorry about the slightly misleading title.) But it does show that their sense of numbers is good enough to tell that 8 is bigger than 5 but less than 20, and that they prefer to have smaller numbers on the left and larger numbers on right. Given that they’re only three days old, the chicks are unlikely to have learned this preference from their environment, suggesting that the association is innate. In other words, these experiments show that there is a biological mechanism underlying a mental number line in chicks. Of course, mental number lines may have appeared independently in humans and chicks, but it seems likely that the phenomenon may be more widespread, encompassing a wide range of animal species. We know that cultural factors can shape the mental number line in humans, but now there’s an indication that we also have an innate, biological preference to arrange numbers from left to right, which may influence (or have influenced) the cultural factors that can (re)orient our number line — a lovely pas de deux between biological and cultural evolution.

The biological basis for the left-to-right orientation may be rooted in asymmetries in the vertebrate brain, such as the right hemisphere’s dominance in handling numerical information. Another candidate asymmetry is the handling of positive emotions by the left hemisphere and negative emotions by the right, coupled with a general principle of “more is better”. Of course, these are all just speculations for the moment. Like most interesting research, these experiments raise a host of intriguing questions from the biological mechanism underlying this preference to how common it is in other species and what impact an innate left-right orientation might have had on human cultural development. 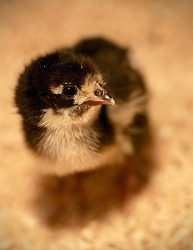