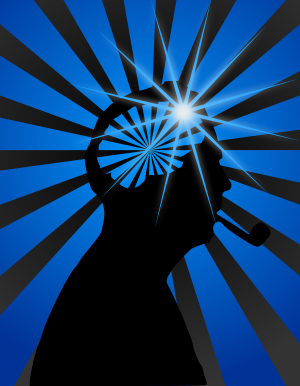 A study from the University of Edinburgh claims to have found the basis of our intelligence in thousands of genes scattered throughout our genome. Although the discovery was made possible by a new statistical method and modern sequencing technology, how the results are interpreted hinges upon a century-old debate about what intelligence is and how we measure it. Will we ever be able to measure something so indefinable or discover the genes behind it?

In 1904 the English psychologist Charles Spearman noticed that people who do well in one subject also tend to do well in other, unrelated subjects; Spearman used this observation as the basis for his theory of intelligence. He developed a statistical method to calculate the “general factor” behind this performance; the g-factor tries to capture a person’s overall intelligence, the core ability that makes them perform similarly at different mental tasks. In the century since Spearman, researchers have continued to elaborate this theory. The modern incarnation treats intelligence as a hierarchy, with g subdivided into broad classes such as “crystallized intelligence”, which is based on long-term memory and acquired knowledge, and “fluid intelligence”, which requires on-the-spot thinking to deal with unfamiliar material and novel situations. Despite disagreements between experts about what g actually measures, it remains the most widely accepted metric of intelligence and correlates well with things like academic achievement, job performance and income.

There’s been continuous debate about the genetic contribution to intelligence. Although many studies have shown that g is highly heritable, it’s been difficult to eliminate possible effects from a shared environment, particularly in the womb. The advent of whole-genome sequencing offers a solution to this dilemma by making it possible to directly compare the genomes of different people and look for correlations with intelligence measurements. In a genome-wide association study (GWAS), researchers take advantage of the hundreds of thousands of little differences in our genome that make every person unique. People who share a characteristic (like a high g score) will have genomes that are similar in the area responsible for that trait; when all of the differences across the genome are compared, this island of similarity will stand out, pointing scientists towards the genes responsible for that trait. Ideally, there will be one region of high similarity, but that often isn’t the case, especially for complex traits which are influenced by many genetic and environmental factors. Unfortunately, intelligence is just such a trait. Although several GWAS in the past few years have tried to discover the genes behind intelligence, none have succeeded.

To overcome this hurdle, the researchers used a statistical technique they had recently developed to analyze height, another complex trait. Led by Dr. Ian Deary and Dr. Peter Visscher, the team measured the crystallized and fluid intelligence of over 3500 volunteers and conducted a GWAS to see how these scores correlated with differences in their genomes at nearly 550,000 locations. Although none of the locations stood out individually, the new method enabled the team to also consider the impact of similarity at all the locations together. The summed effect across the entire genome explained 40% of the variation in crystallized intelligence and 51% of the variation in fluid intelligence. In other words, the study revealed that intelligence isn’t driven by a handful of genes with strong effects but by thousands of genes each of which has a very small influence. These findings were later confirmed by an independent study at Harvard, which showed that 47% of the variation in g was accounted for by 630,000 locations throughout the genome.

These GWAS showed that g has a genetic basis, but since it still isn’t clear what g actually measures this might not translate into finding genes responsible for intelligence . In addition to doing well academically and professionally, people with a high g score also tend to be taller and healthier, have more symmetric bodies and live longer. These correlations have led some researchers to suggest that the “general factor” measured by g may not be overall intelligence but something more like biological fitness. Under this interpretation, these GWAS have shown that thousands of genes affect general fitness rather than general intelligence; their effect on intelligence is indirect, since people who are more fit will tend to perform better on intelligence tests as well as living longer, healthier lives.

8 thoughts on “What makes our intelligence heritable?”