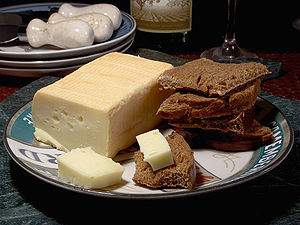 Cheese may be a gourmet’s delight and a major industry these days, but it was probably originally just a good way to keep milk from spoiling and to deal with lactose intolerance.  In a paper published in Nature last month, a team of scientists from the UK, US and Poland used evidence from pottery remains to show that this venerable art stretches back at least 7,000 years.

In 2008, Richard Evershed of the University of Bristol showed that humans in north-west Anatolia were using milk as early as 8,000 years ago, but it wasn’t clear whether the milk was only used directly or also made into products like cheese, butter and yoghurt.  While milk is an excellent way to get nutrition from cattle without killing them, it spoils quickly.  One solution is to process the milk into cheese and yoghurt.  These also have the advantage of being easier to digest than milk.  Although human babies can digest milk, many people lose this ability with age.  These people are unable to break down lactose, a sugar found in milk, and can suffer from cramping, bloating, flatulence, or diarrhoea as a result.  Cheeses and yoghurt have less lactose as a result of how they are made, and so are more palatable to lactose intolerant people.  The ability to digest lactose has probably evolved several times in different groups of humans, but is most common in European populations.  As a result of a mutation around 7,500 years ago, the people of the “Linear Pottery” culture in the Balkans and central Europe became lactose tolerant; thanks to this mutation, most of their descendants in Europe and the Americas are able to enjoy milk today.

The communities of the Linear Pottery culture were amongst the earliest users of domesticated plants and animals in inner central Europe.  Among the pottery remains of this culture are fragments pierced with a collection of small holes.  Given that the Linear Pottery people had cattle, it’s likely that these “sieves” were used for straining cheese, though they may also have been used to cover flames or strain honey.  “We decided to test the cheese-making hypothesis by analysing the lipids trapped into the ceramic fabric of the sieves,” said Mélanie Salque, a PhD student from the University of Bristol who was involved in the study.  The researchers extracted traces of fats from fragments of 34 sieve vessels and compared them with fats from other vessels such as cooking pots, bowls and flasks.  The pottery fragments, dated from 5200-4800 BCE, were from take settlements along the Vistula river in Poland.  By measuring the ratio of different carbon isotopes and using a technique called gas chromatography-mass spectrometry, the team was able to identify the different kinds of fatty acid residues on the pottery shards and draw conclusions about how the items were used.

For example, some kinds of fatty acids are only found in milk, while others are found in both milk and body fat.  The milk-specific fatty acids were much more common in fragments from sieves than in cooking pots, suggesting that each kind of utensil was used for a particular purpose.  The carbon isotope analysis also showed that the residue in the sieves was made up of dairy fats while the residue in the cooking pots bore the signature of body fat from ruminants; in fact, two of the pots even showed evidence of having been heated to high temperatures.  Some of the bowls also had a residue of dairy fats, so they might have been used in conjunction with the sieves to process milk.  There was also a residue of beeswax in most of the flasks, one of the cooking pots and a few sieves.  These vessels might have been used for straining and storing honey or perhaps treated with beeswax to waterproof them, a possibility supported by the observation that one flask seems to have been waterproofed with animal fat.

Based on these findings, the researchers suggest that the sieves at these prehistoric sites were used to process milk into cheese.  Cheese is made by curdling milk and then separating the curds from the liquid whey; the sieves could have been used for this straining process and the filtered whey collected in the bowls.  Peter Bogucki, one of the authors of the study, explained the benefits this would offer, saying, “Making cheese allowed them to reduce the lactose content of milk, and we know that at that time, most of the humans were not tolerant to lactose.  Making cheese is a particularly efficient way to exploit the nutritional benefits of milk, without becoming ill because of the lactose.”  As intriguing as it may be that humans were making cheese seven millennia ago, I find myself more amazed by the fact that we’re able to detect and identify the residue after so much time!