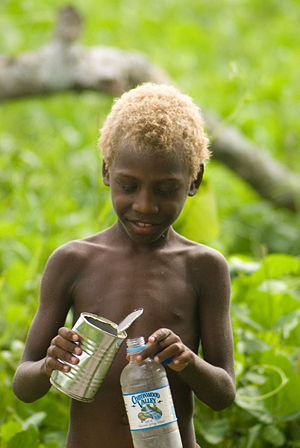 On the Solomon Islands in the south-eastern Pacific, it’s not uncommon to come across Melanesian children with dark skin and remarkably blond hair. While most people might take this unusual trait as a sign of European ancestry, Sean Myles wasn’t convinced. Curious to understand how the darkest skinned people outside of Africa could also have the highest frequency of blond hair outside of Europe, he led a team of scientists to unravel the genetics behind this mystery. The striking results of their research should serve as a note of caution about what we’re learning from the rapidly growing field from human genomics.

To root out the genes behind the blond hair, the team used a genome-wide association study, or GWAS, a technique which takes advantage of the thousands of little differences that make everyone’s genome unique. Differences which are more common in people with a particular characteristic are likely to be physically close to the genes associated with that trait. Scientists can search the whole genome by using chips which probe hundreds of thousands of differences at once; the results is a list of regions in the genome which are associated with the trait. Many traits are likely to be influenced by a wide range factors, both genetic and environmental; these “complex” traits are often associated with several genomic regions, each of which has only a small effect on the outcome. This time, though, the team got lucky. Comparing the genomes of extremely blond and dark haired Solomon Islanders at nearly 600,000 locations, they found an exceptional result: a very strong signal at just a single location. Even better, there was only one gene in that region. “It was such a striking signal pointing to a single gene — a result you could hang your hat on. That rarely happens in science,” said Eimear Kenny, the postdoc who analysed the data. “It was one of the best experiences of my career.”

The lone gene in that stretch of the genome was TYRP1, a gene which plays a role in melanin synthesis in many vertebrates. Cats, rats and pigs with mutant versions of TYRP1 all have lighter hair, while mutations which completely disable it cause a type of albinism in humans. By comparing the sequence of TYRP1 in blond and non-blond individuals, the researchers identified the precise mutation responsible for blond hair. This mutation isn’t severe enough to completely disable the gene; instead, it probably makes it less effective by changing the final shape of the protein encoded by TYRP1. Like most mutations, it seems to be recessive, meaning that both copies of the gene (maternal and paternal) have to be the mutant form in order for it to have an effect. As a result, even though 26% of the population carry the mutated gene, only about 7% have blond hair.

The mutant form of TYRP1 isn’t found in Europeans, where blond hair results from a mutation in a different gene, MC1R. Blond hair must therefore have evolved at least twice in humans: once in Europeans and separately in Melanesians. While there’s nothing surprising about a trait evolving several times, it is remarkable that it’s taken over a decade since the human genome was sequenced for us to discover this about something as prominent as blond hair. One has to wonder what other genes we’ve missed which might underlie the rich variety of human colours, body types, metabolisms and medical conditions.

Genomics research has suffered from an unfortunate bias to date, focusing to a much greater extent on European populations and their descendants than on other groups. Such a narrow focus could lead us to easily miss genetic variants that are prominent in other groups but rare or absent in Europeans. TYRP1 is an excellent example. The mutation found in this study seems to be unique to Melanesians; it was absent in over 50 other populations the team examined from around the world. Some of these undiscovered variants could have significant effects, shaping important aspects of human health and development. Reflecting on the study, Sean Myles described it as “a call for action […] to ensure that the benefits of current genomics research extend beyond privileged populations and provide an increase in well-being for people everywhere”. I couldn’t agree more.

The press release from Stanford.

Update: I asked Sean Myles (now an Assistant Professor at Dalhousie University) what made him think it would be worthwhile to investigate this question — why didn’t he buy the “European ancestry” idea? He responded that genetic samples from an earlier visit showed no evidence of European ancestry; coupled with the inheritance pattern, this gave him “a hunch that we were probably dealing with a single gene with large effect that was not shared with Europeans.”

5 thoughts on “Blond Melanesians: what else are we missing?”