Like many other fields, science has its own style of communication full of specific jargon and guided by unwritten rules.  Most of the posts on this blog focus on breaching this barrier to the public’s understanding and appreciation of science.  In this series, I’d like to take another approach by highlighting scientific words which have escaped (or should escape!) the confines of jargon to reach a broader appeal because of their sound or their evocative power as metaphors.  Today’s word is alluvium.  [Previous words: petrichor] 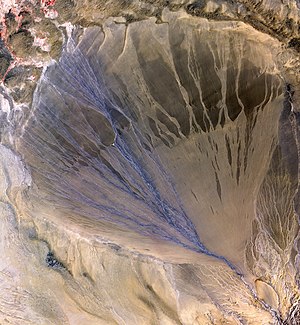 Alluvium (pl. aluvia; adj. aluvial) is the loose earth and sand deposited by moving water.  When it’s moving fast, water picks up lots of sediment which is deposited when the water slows down; this deposit is called alluvium.  The earliest quote in the OED is from the 1655/6 issue of the journal Philosophical Transactions; the word is originally Latin (alluvium, from ad=”to/against”; lavare=”to wash” (which is also the root of words like lavatory & laundry)).  If the river slows down and spreads out as it comes to a plain, the alluvium is deposited over a wide area, forming an alluvial fan (pictured on the right).  Alluvial fans can be enormous, covering several thousand square kilometers; the megafan of the Kosi river, in the Indo-Nepal border region, has an area of about 15,000 km².  In addition to earth and sand, alluvium can contain precious metals and even gemstones; gravity can separate the precious minerals from the rest of the deposit, creating a placer deposit.

Alluvium is a rich, fertile soil, making the flood plains of many of the great rivers ideal for agriculture.  The Mesopotamian (from the Greek mesos=”middle/between”; potamos=”river”) flood plain between the Tigris and Euphrates rivers (in modern Iraq) was home to some of the earliest human civilisations; together with the Nile delta and river valley, it forms the famous Fertile Crescent, often called the “cradle of civilisation”.

Although I have come across metaphorical uses of the word alluvium (and alluvial), I would very much enjoy seeing it used more frequently.  It brings to mind a haphazard yet somehow organized arrangement, a disarrayed pile crafted by a gradual process.  The association with fertility also hints at a sense of latent potential, giving extra resonance to the word.  After all, our civilisation started on the rich soil of alluvial flood plains.

“Out of this book alluvium a hole seemed to have been dug near the fireplace.”

1 thought on “Words of science: alluvium”