In 1994, David Noble was trekking through Wollemi National Park in the Blue Mountains, about 200km northwest of Sydney, Australia, when he came across a copse of unusual looking trees.  Unable to identify them, he took specimens back with him for further study.  Botanists were shocked to realize that the trees which Noble had found belon 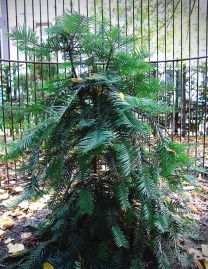 ged to a lineage which they believed had been extinct for millions of years.  Designated Wollemia nobilis (in honour of the place and person of discovery), this “living fossil” made international headlines and has been dubbed the botanical find of the century.  Since then, two other groves of W. nobilis have been discovered near the original, but the  extremely low number of specimens found in the wild make the Wollemi pine one of the most endangered tree species on the planet.

Conservation efforts immediately began; attempts were made to propagate the tree both by seed and through tissue culture.  Fortunately, these efforts have met with some success and Wollemi pines can now be found in botanical gardens and backyards throughout the world.  However, a 2003 study led by Rod Peakall (of the Australian National University) found alarmingly little genetic variation in the Wollemi pine.  In fact, no genetic diversity at all was found, although a quarter of the wild trees were sampled, along with 70 seedlings grown from the seed of five trees.

The researchers also looked at diversity in several closely related species for comparison.  W. nobilis is the only surviving member of its genus, but five other Australian tree species belonging to two genera (Agathis and Araucaria) are members of the same ancient family — the Araucariaceae. Peakall and his colleagues examined two of these species (the kauri pine, Agathis robusta, and the hoop pine, Araucaria cunninghamii); they found low levels of diversity in these species as well, suggesting that this may be a feature of the entire family.

These results present a worrying challenge to the conservation efforts.  Extremely low levels of diversity reduce the ability of a species to deal with threats such as pathogens or environmental stress.  Normally, a population would contain some individuals who were (by chance) more resistant to such a threat; a reduced level of diversity means that there is a lesser chance of finding such individuals, since the genetic reservoir of the species is smaller.  This increases the risk of extinction, especially if the population is concentrated in a few areas, as is the case for Wollemia.

Genetic diversity is measured using techniques similar to the DNA fingerprinting technology which is sometimes used in modern court cases.  When an organism’s DNA is cut at specific sites using enzymes, genetic differences between individuals will result in fragments of different lengths.  The DNA is then run through a gel; fragments of different lengths  will travel different distances and each fragment shows up as a dark band. By comparing the pattern of the bands for different individuals, scientists can quantitatively estimate how similar they are.  In court cases, this can be used to establish someone’s identity or relatedness; when done for an entire population, it gives a measure of the genetic diversity.

DNA can be cut up, or “digested”, in several ways, each of which is sensitive to a particular kind of genetic variation; by using several of these techniques together, researchers can arrive at a more accurate estimate of diversity than any single approach would allow.  Accuracy can be further increased by cutting at different sites in the genome.  Peakall and his coworkers examined over 800 sites using AFLP (Amplified Fragment Length Polymorphism, where the DNA is cut at specific sites and then the fragments are amplified using a technique called PCR) and a further 20 SSR sites (Single Sequence Repeats, or microsatellites, which are sites where a short pattern of DNA is repeated over and over — this repetition may confuse the DNA replication machinery, which leads to very high levels of variability between individuals). They also looked at the diversity levels in 13 allozymes, enzymes which have small structural differences between individuals but perform the same function — the differences in structure can be seen on a gel in the same way as differences in the length of DNA fragments.

In all of the sites they examined, the researchers found no differences whatsoever between the 96 DNA samples (26 from wild trees and 70 from seedlings).  Because only 4 of the 20 SSR sites were considered good candidates for variability, Peakall and his colleagues prefer to conclude that genetic variation in Wollemi pine is very low, rather than non-existant — there may be variation at other SSR sites which they did not detect.

Variation levels in Ag. robusta and A. cunninghamii were also found to be low; in Ag. robusta, only one allozyme site and five AFLP sites were found to vary, while only 10 AFP sites and five SSR sites were variable in A. cunninghamii.  These results indicate a low level of diversity (10-15%) when compared with an average of 50% in long-lived woody perennials and 57% in gymnosperms.  This suggests that low levels of genetic diversity may be characteristic of the Australian Araucariaceae as a whole, perhaps due to their geological history of repeated range expansion and contraction associated with the ice ages.  Other explanations might be the effect of genetic drift (a process by which random sampling from small populations can reduce or eliminate variation) and the possibility that all (or most) of the Wollemi “trees” are, in fact, a single clonal tree.

Regardless of the cause, these low levels of genetic diversity are a source of concern for conservation efforts of the Wollemi pine.  The lack of genetic variation means that the population is more susceptible to pathogens.  Indeed, the prospect that there is no variation at all in wild W. nobilis creates the risk of a single fungal pathogen eliminating the entire population and finally driving the species to extinction.  In November 2005, wild Wollemi pines were found to be infected with the fungus Phytophthora cinnamomi (perhaps introduced by unauthorised visitors), making this unfortunate scenario a very real possibility.

What does the future hold for Wollemia?  Will this hardy tree, once thought to be extinct, manage one of the most remarkable comebacks in natural history?  Given the extensive work which has been done to propagate these rare gymnosperms in botanical gardens, the species seems quite likely to survive.  Wollemi pines are even available to the public, and scientists are hoping that people will choose to plant this remarkable tree in their homes and gardens, helping to conserve this endangered species; specimens are also being grown in several botanical gardens around the world.  Though these efforts may succeed in preserving the species, a great treasure will have been lost if the original wild population, which managed to survive in hiding for millions of years, through bush fires, ice ages, the movement of the continents and the passing of the dinosaurs, is driven extinct after only a few decades of exposure to mankind.

3 thoughts on “On the brink of extinction”