One of the great things about working at a university is the opportunity to go to talks and learn about all kinds of interesting subjects from experts. As a biologist, I don’t usually hear much about Mars and astrogeology in my daily life, but I had the pleasure and privilege of attending a talk by Professor Victor Baker earlier this week. During his visit to Helsinki, Professor Baker lectured about the geological history of water on Mars. Though this is well outside my area of expertise, I hope to share some of the amazing things I learned, starting with a story about the recent ice age on Mars and the astonishing mechanism behind it.

Easily visible to the naked eye, Mars is one of the brightest objects in the night sky.  It’s been an endless source of fascination and inspiration to generations of scientists, thinkers and artists, tantalizingly familiar and yet profoundly different from our home.  In many ways, Mars seems like Earth’s barren twin, condemned to death by its smaller size and more distant orbit.  Its smaller size and mass mean that Mars has a much thinner atmosphere than the Earth — at its most dense, the Martian atmosphere is equivalent to the atmosphere 35km above the Earth’s surface.  The very low atmospheric pressure means that ice doesn’t melt on the surface of Mars but instead sublimes, going directly from a solid to a gas without passing through a liquid phase.  Ice is abundant on Mars, with two large polar ice caps and a permafrost layer extending to latitudes of about 60°.  Mars also has the most Earth-like seasons of the other planets in the Solar System, though its greater distance from the Sun means that winter temperatures can reach a

blistering -143°C at the poles.  The similarities don’t end with the seasons, though; in a paper published in 2006 in the journal Nature, a team of researchers from Brown University (Rhode Island), Boston University (Massachusetts) and Kharkov National University (Ukraine) argued that, like Earth, Mars has also recently been through an ice age.

Observations by NASA’s Mars Orbiter Laser Altimeter showed variations in roughness across the surface of the planet with an unusually smooth region between latitudes of 30-60° in both hemispheres. This region also has an abundance of water-carved gullies, glacier-like flows and different types of patterned ground related to thermal cycling of ice.  Based on an analysis of these features, the researchers concluded that the region between 30 and 60° is covered by a mantle of ice and dust that was deposited on the surface and is gradually being removed as the ice sublimates.  They argue that this ice-rich mantle used to extend to latitudes as low as 30° — as far south as Texas, North Africa and the Hubei province in China and as far north as Porto Alegre in Brazil and the southern tip of Africa — during the Martian ice age.  What kind of process could generate such an ice age on Mars and what brought it to an end?

The researchers proposed an extraordinary mechanism: changes in the tilt of Mars’ axis.  Today, Mars has an axial tilt of 25°, slightly greater than that of Earth.  While the Earth’s tilt has hardly varied thanks to the stabilizing presence of the Moon, numerical simulations show that between 400,000 and two million years ago the tilt of Mars has ranged from 15-35°.  The team ran global climate simulations to understand the effect that these changes would have on the Martian climate.  The increased tilt points the poles more directly at the sun, causing them to warm.  When the tilt is over 30°, the ice at the poles begins to sublimate; this increases the atmospheric humidity, making it possible for ice to persist at lower latitudes.  The sublimation also creates strong winds, blowing dust into the atmosphere.  The water vapor nucleates on dust particles on the surface or in the air to form frost and snow, 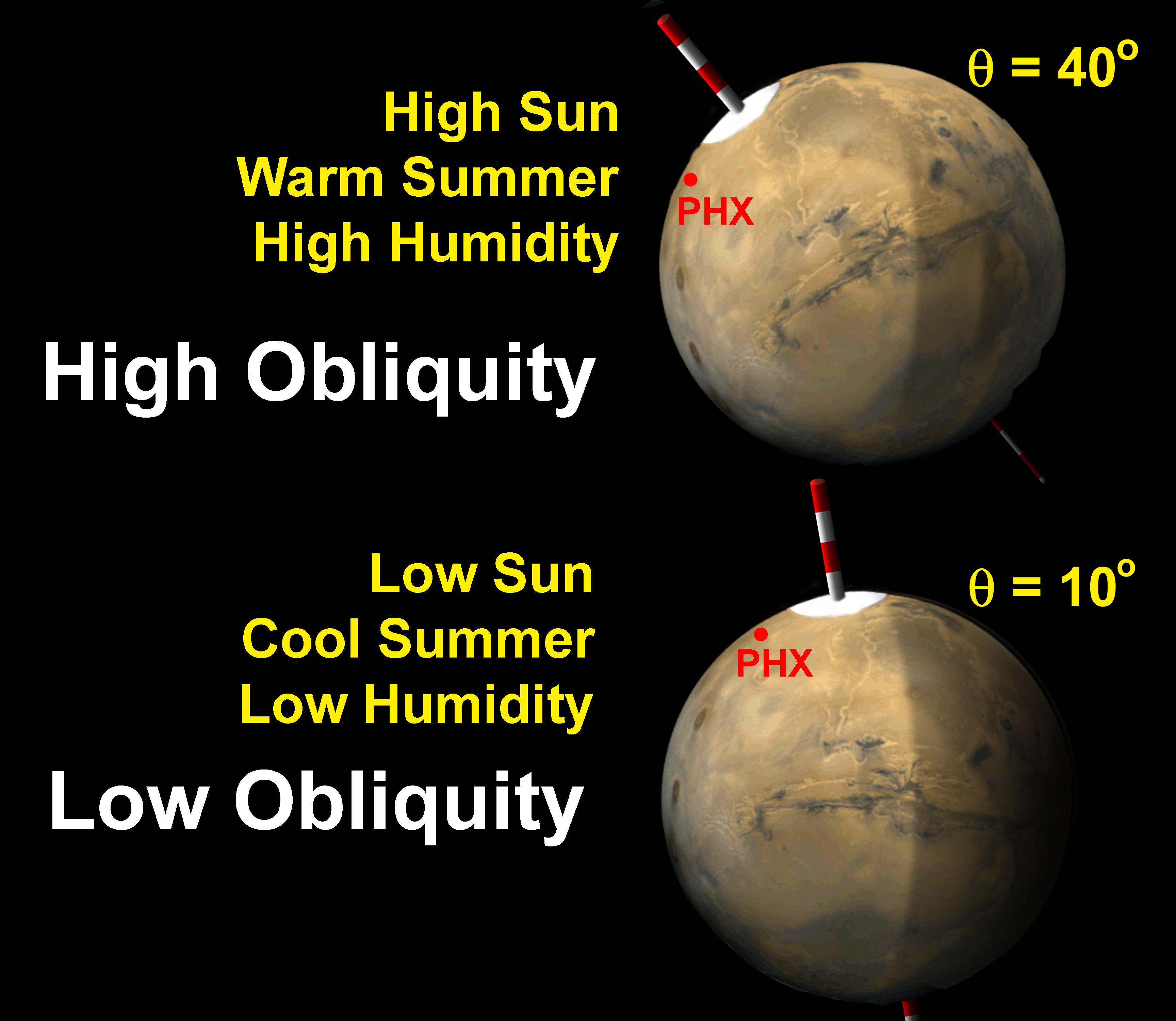 creating an ice-rich dusty mantle covering the lower latitudes — an ice age.  The mantle is too thick to disappear when the tilt decreases for a short period but retreats towards the poles during longer periods of low tilt.  Like the Earth, Mars is currently in an interglacial period; for the past 400,000 years, it has had a tilt between 20-30°, causing ice to sublimate at low latitudes and accumulate at the poles.

Counter-intuitively, the Martian ice age was a result of warming of the poles.  This is very different from the process on Earth, where cooling of the poles traps greater and greater amounts of liquid water in glaciers which spread over the landscape.  Although we don’t fully understand what triggers ice ages on Earth, changes of 1-2° in our axial tilt are thought to have played an important role.  As the crescent Moon makes its shy appearance tonight, we should be thankful for its stabilizing effect on the Earth’s tilt — variations on the scale experienced by Mars would have had dramatic consequences for the climate (and life!) on Earth.

Aside from how amazing it is in itself, learning about geological and climate processes on Mars is quite important for expanding our understanding of how Earth-like planets work.  Everything we know at the moment is based on one data point — the Earth — which is a pretty limited sample.  “These extreme changes on Mars provide perspective for interpreting what we see on Earth,” says Dr. David Marchant, one of the authors of the study.  We’re incredibly lucky to live in an era when we’re discovering so much about the universe near and far, when Cassini and Curiosity are beaming back fantastic pictures of Saturn and Mars and astronomers, both professional and amateur, have discovered hundreds of exoplanets in just a few years.  I’m looking forward to all the exciting discoveries that await us and to writing about them.  In the meantime, I hope to share more of what I learned from Professor Baker — including the intriguing possibility that there was once an ocean on Mars.

5 thoughts on “Ice Age on Mars: how it started and ended”