Early on the morning of March 15th, there was a massive explosion on the surface of the sun.  Magnetic field lines came together and reconnected, releasing immense amounts of energy in a coronal mass ejection which electrically charged particles hurtling out into space.  Fortunately, the CME was on the Earthward face of the sun.  Better still, it seemed to be directed straight at us.

The solar wind raced towards the Earth, crossing the cold gulf of space at an incredible 700km/s — around 2.5 million kph!  Two and a half days later, these highly energetic protons and electrons smashed into the Earth’s magnetic field.  Charged particles can change direction when they fly through a magnetic field — that’s how the old CRT televisions worked — so the high-speed solar wind was deflected around the Earth by its magnetic field.  Some of the charged particles, instead of being deflected around the Earth and out into space, followed the magnetic field to the poles and down into the atmosphere.  Racing into the upper atmosphere, they crashed into oxygen atoms.  The impact made these atoms much more energetic; as they lost their extra energy, they fluoresced (just like a fluorescent bulb), producing a green glow that I was lucky enough to see: the aurora borealis.

The solar wind probably also energized some nitrogen particles to make red aurora, but I didn’t get to see any of those over Helsinki.  The solar wind has to penetrate deeper into the atmosphere to excite nitrogen and make a red glow that we can see, so red northern lights are more common further to the north.  The aurora don’t just happen over the North Pole; excitation of the atmosphere over the Southern Pole — called aurora australis or southern lights — happen together with those over the North Pole.  Here in Finland, the aurora are called revontulet, which means “fox fires”, because of old legends that they were made by an arctic fox.  One version claimed that the fox started fires by rubbing its bushy tail against mountains, sending up sparks that we see as the northern lights.

In addition to being beautiful, the aurora are immensely powerful, producing tens (or even hundreds!) of billions of watts (i.e., gigawatts).  A single show can produce as much energy as the North American power grid!  Unfortunately, that energy is spread over millions of square kilometers and released high up in the atmosphere, so we don’t really have a way of harnessing it.  Very powerful aurora can sometimes generate current in our electrical system; in 1859, an auroral storm produced enough power in some telegraph lines for operators to continue using them with the power switched off.

Earth isn’t the only planet in our solar system that gets auroral displays.  Jupiter, Saturn, Uranus and Neptune all have magnetic fields strong enough to produce aurora; here’s an amazing Hubble photo showing the aurora on Saturn: 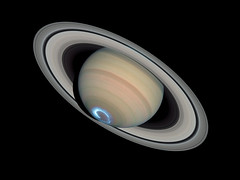 Unfortunately the conditions tonight weren’t ideal for photography and we weren’t really prepared, so our pictures aren’t as impressive as I’d hoped.  What about you?  Have you seen the aurora (bonus points if you’ve seen the Southern Lights)?  Did you get any photos you’d like to share?  What are they called in your language and do you know any interesting or amusing stories about these mystical displays that light up our night sky?