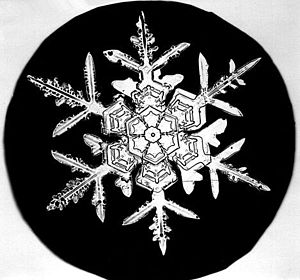 Snowflakes, with their intricate patterns and captivating symmetry, are entrancingly beautiful and have become a ubiquitous icon of winter. Reading D’Arcy Thompson’s On Growth and Form during the plentiful and early snowfall we’ve enjoyed in southern Finland this winter, I couldn’t help but wonder how these remarkable structures form. I decided the right response would be to write a post about it and avail myself of the opportunity to learn about something new. We’re having a white Christmas in Finland, but wherever you are and whatever the weather may be, read on to find out what makes snowflakes so beautiful and whether each one really is unique.

Snow is made up of ice crystals which form in the clouds and fall to Earth; the crystals grow as they fall, reaching several millimeters in size. Under the right conditions, several crystals might also clump together to form snowflakes. Supercooled water droplets in clouds crystallize around microscopic particles like dust, soot or even bacterial cells and proteins to form crystals; since ice is lighter than water, the newly formed crystals may be propelled higher by updrafts before they begin their downwards journey, tumbling to and fro as they fall to the surface.  As they fall, competition between gravity and updrafts shapes a unique path for each crystal.  Along the way, the growing crystal passes through different regions of the cloud each with its own temperature and humidity. Since the growth of the crystal depends strongly on the conditions around it, the path each crystal takes as it grows affects its shape; the intricate patterns in the branches and ornaments of a snow crystal record the turbulent tale of its fall to Earth. Although these picturesque, star-shaped crystals tend to get the most attention, snow crystals can also take less complex shapes, such as simple plates and columns, depending on the conditions in which they form.

Molecules of water become arranged in groups of six as they freeze because of their shape and electrical properties, forming hexagonal ice crystals. These hexagonal prisms are the core of snow crystals and form the most basic shapes. Crystals in which the top and bottom face grow faster than the sides will elongate into columns, while those in which the sides grow more quickly will form thin plates. Under certain conditions, more water will freeze on the six corners of the hexagon, which stick out further than the faces. If that happens, the corners will grow faster than the faces, forming branches which stick out even further and so grow even faster, eventually leading to elaborate, star-shaped crystals. The shape and ornamentation of the branches depends on the conditions around them as they grow; since the corners of a single crystal are close enough to experience essentially the same conditions, they all grow in the same way, producing the famous and beautiful star-shaped crystals with six-fold symmetry. 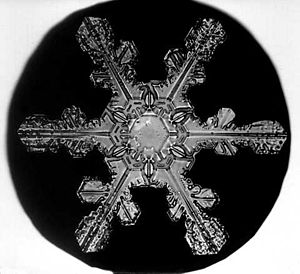 The precise shape of an ice crystal results from a series of complex and interconnected processes at its surface; how these processes unfold depends strongly on the temperature and humidity around the growing crystal. Researchers have studied how these factors affect the growth and form of snow crystals by creating them under controlled conditions in the lab.  Around -2°C, ice forms as hexagonal plates, the thickness of which depends on how super-saturated the air is with water. At -5°C, column-shaped crystals form; the columns are stout at low levels of super-saturation and elongate as the saturation increases, forming hollow cylinders at intermediate levels and needles in highly saturated air. Plate-shaped crystals form again when the temperature reaches -15°C; at these colder temperatures, higher saturation levels lead to branching, forming the iconic, thin, stellar snow crystals. Columnar crystals reappear as the saturation levels increase or the temperature drops even further, eventually becoming the dominant form around -30°C. In addition to these basic shapes, snow crystals can also form more complicated forms like double plates and columns capped with plates on the ends.  Although the main shape of the crystal is determined by temperature, a great deal of individual variation exists within each of these classes thanks to the sensitivity of growth to small changes in saturation levels or temperature.  As each crystal falls through the cloud, it passes through regions with different conditions, forming a unique shape thanks to the unique path it takes.

Scientists have also used mathematical models to understand the dynamics of these complex process.  The models have confirmed that most of the diversity of snow crystals comes from the path they take as they fall to Earth; the research also predicts that the conditions which generate large crystals also encourage greater diversity.  Crystals which grow quickly will have a larger area and face greater wind resistance; this will make them fall more slowly, giving them more time to grow and respond to different conditions during their fall.  Large, slow-falling crystals will have more time to encounter and respond to different conditions during their descent, allowing them to form more elaborate and diverse shapes.

Humans have a penchant for organizing and classifying the world, from the periodic table of elements to groups of animals; the beautiful shapes of snowflakes haven’t escaped this habit.  Snow crystals are classified according to their form, just as living creatures used to be, and it’s not hard to imagine a naïve, over-eager taxonomist mistaking the similarities between crystals for evidence of a shared evolutionary history; in fact, these similarities are evidence of a common developmental path.  There’s a lesson here for biologists to bear in mind.  Diverse, intricate structures can arise in the absence of selection; even when these are shared between groups of organisms, such as the shells of different molluscs, this may not be evidence of evolution by natural selection.  Evolution may not have shaped every part of an organism, but every part conforms to physical laws and these laws may be enough to create elaborate and rich patterns.

The formation of snow crystals is a complicated subject; I’m glad to have learned something about it this week and I hope I’ve managed to pass some of that information on.  There’s a great deal more information on Ken Libbrecht’s excellent and award-winning website; you can also have a look at the beautiful photo gallery.  If you’re enjoying a white Christmas, just grab yourself a pocket magnifying glass and go out to look at the crystals that have fallen — from the simpler, but still beautiful, plates, rods and needles to the intricate and unique stellar crystals. 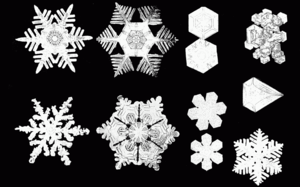 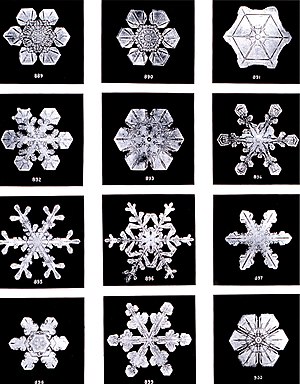